This release includes defences for an attack against SegWit users. Please upgrade ASAP.

This issue can only affect SegWit addresses, and would require you to accidentally sign twice for what looks like the same transaction. Neither signed transaction is valid, but they could be mixed together into a valid transaction that gives away your coins to miners.

The attacker must be a MiTM and able to produce two modified PSBT files, trick you into signing them both, and then combine the signed results from those two signed PSBTs into another transaction before sending. There is no evidence any malicious actor has exploited this bug, but the underlying limitation of BIP-143 has been known for years.

All hardware wallet vendors are affected because this known flaw is part of the standard for SegWit signatures. Each vendor will have different solutions, some of which may break backward compatibility, or have a big impact on the rest of the ecosystem.

The Coinkite solution is to add some history to the COLDCARD: It will now capture the amount stored at the recently-used SegWit UTXO you control. For the attack to work, the attacker needs to present different (fraudulent) amounts for two or more UTXO. We can detect that happening now, since UTXO are immutable. Your stored UTXO are compressed, hashed and encrypted so they cannot be revealed if your COLDCARD is captured, even once unlocked with the PIN.

If the attack is attempted, the PSBT will be rejected, and you’ll see an error message, similar to: Input#0: Expected 15 but PSBT claims 5.00001 BTC

Bottom line: After this upgrade, you are secure against this attack. You don’t need to change any other software nor change the contents of PSBT files.

Notwithstanding BIP-341 Taproot fixes everything😉

You probably haven’t heard of BIP-85 yet because it only became official a few days ago. You will want it! It’s a big usability and convenience upgrade:

COLDCARD can now derive “entropy”, based mathematically on your COLDCARD’s seed value. This will be displayed as a 12 or 24 word seed phrase, or formatted in other ways to make it easy to import into other wallet systems.

You can easily recreate this value later, based only the seed phrase or encrypted backup file for the COLDCARD.

Thanks go to Ethan Kosakovsky for creating this useful standard, and for accepting our additions as the standard was being refined. 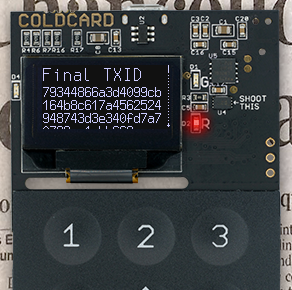 We now have started releasing video tutorials: check them out on Youtube.

More being added every other day!

You probably haven’t heard of BIP-85 yet because it only became official a few days ago. You will want it!

COLDCARD can now derive “entropy”, based mathematically on your COLDCARD’s seed value. This will be displayed as a 12 or 24 word seed phrase... https://t.co/IOSv7PMxE7 pic.twitter.com/kDmqHJloOR